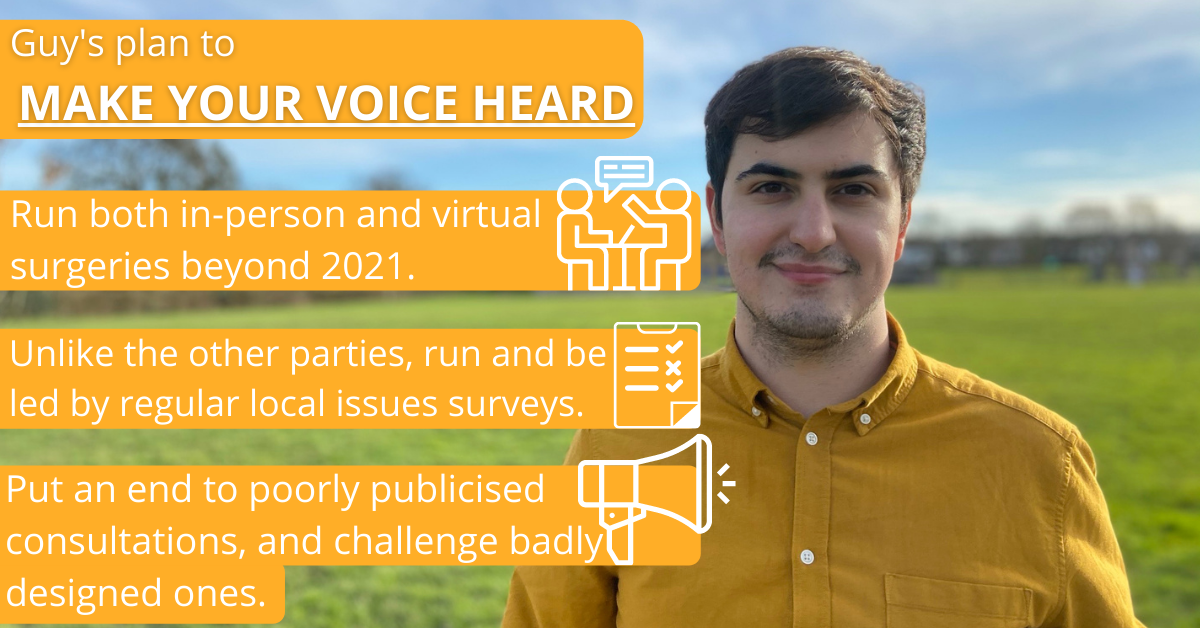 As a Liberal Democrat, Guy believes in stronger community politics and local democracy.

The Labour Council are no champions of local democracy, with Councillors unresponsive to people's needs, taking their policy priorities from the top-down and not the bottom-up, and a poor record of running proper consultations.

Guy's plan to make sure your voice is heard at the Civic Centre involves:

1. Running both in-person and virtual surgeries beyond 2021.

"One of the biggest lessons for all of us from the Coronavirus pandemic has been that Virtual meetings can reach more people than in-person sessions, allowing more people to have a say about the issues affecting them without having to worry about sorting out childcare or balance other commitments. It is ridiculous that the Council has not learnt this lesson and has barely run virtual surgeries for residents since March 2020. As your councillor, I will make sure I offer both in-person and virtual surgeries to give more of the people of Chase the chance to have their say, ask for help and let me know what local issues are affecting them."

2. Unlike the other parties, run and be led by regular local issues surveys.

"When you receive leaflets from your local representatives, they are almost always asking for your vote rather than asking for your opinion. That has to change. Elected Liberal Democrats across Britain have always been champions of running regular surveys, both on leaflets and online. If elected I pledge to deliver regular surveys throughout the year so that I can be led by you, focusing on issues that you tell me matter, not the other way around."

3. Put an end to poorly publicised consultations, and challenge badly designed ones.

"How many times have you only found out about something major happening in the local area when it's too late to have your say on it? This Labour Council has a terrible reputation for poorly advertising their projects (just look at Whitewebbs!), and designing consultations that are not open-ended enough for you to have a meaningful say. As a strong local voice, I won't keep you in the dark like the Labour or Tory councillors we are used to. I will shine a light on consultations as soon as we find out they are happening, making sure you have plenty of time to respond meaningfully, and I won't be afraid to call out the ones that are clearly designed with one outcome in mind. I am a liberal, local democracy genuinely matters to me."

If you agree, vote Guy Russo on May 6th to make sure your voice is heard at the Civic Centre.