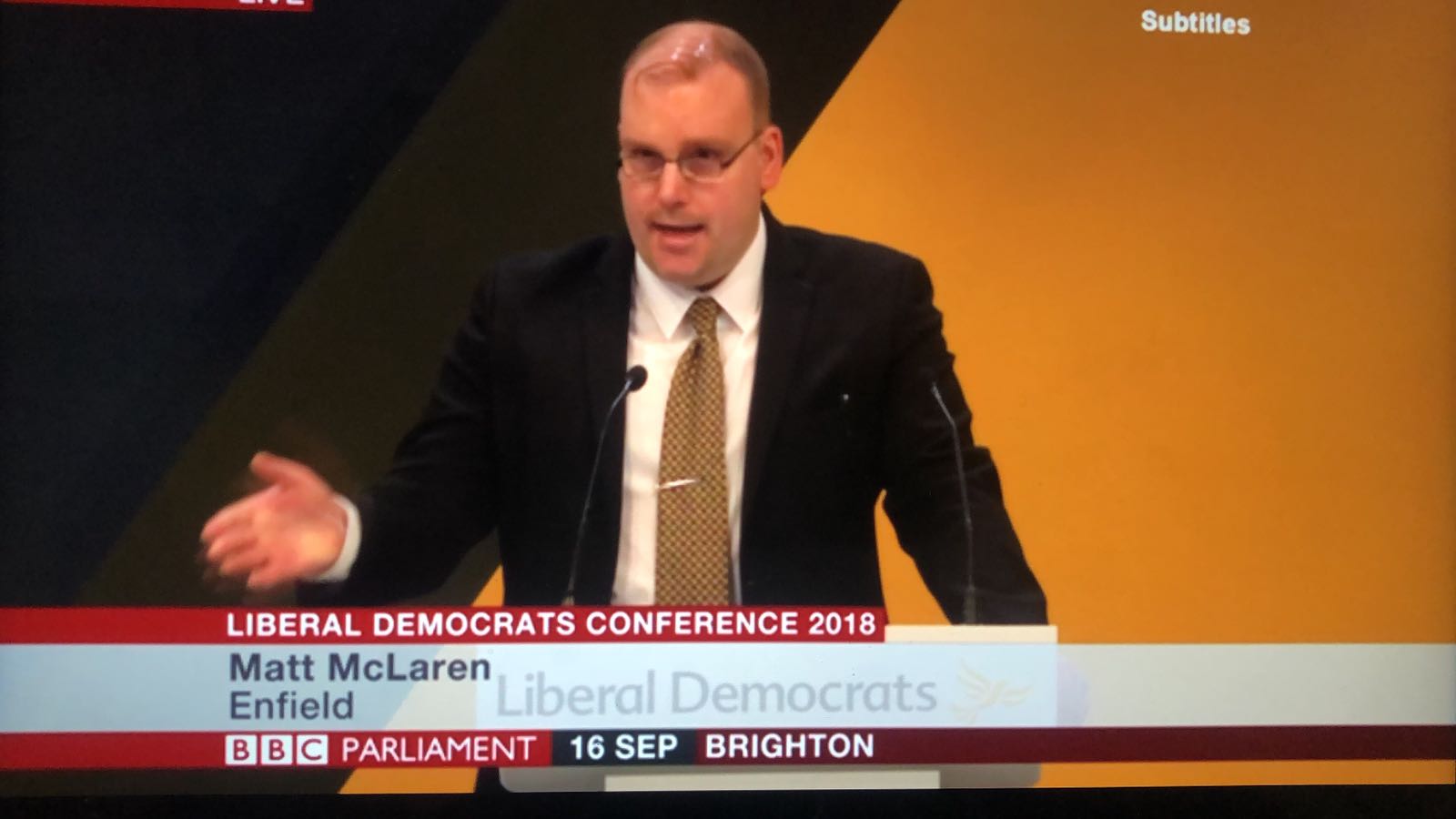 Liberal Democrats from Enfield took centre stage at the Party’s annual Conference in Brighton this week. In a debate taking place on Sunday afternoon setting out the Party’s policy on Britain’s place in a changing world; local resident, three-time Lib Dem candidate for Enfield Council and former European Parliamentary candidate Matt J. McLaren took to the podium to set out the case for free trade.

In a speech broadcast live on the BBC’s Parliament channel, Mr McLaren argued against the trade polices advocated by controversial US President Donald Trump – saying that Trump’s protectionist agenda not only cuts off “honest sellers of quality products in developing nations from their customer base” but makes “products in our home economy more expensive for consumers and businesses alike”. “Ultimately everyone is poorer” whenever tariffs are imposed and barriers raised to free trade, McLaren concluded.

In summing up the case against Trumpian economics, McLaren said “Free trade empowers developing nations, lowers prices at home, prevents arbitrary interference by small-minded despots like Trump, and is ultimately the liberal approach.”

After watching the debate in the auditorium, Chair of Enfield Liberal Democrats Dave Mitchell said: “It is great to see local campaigners from Enfield leading the national debate on these hugely important issues. International trade may seem like a remote issue but ultimately what we’re talking about here is how expensive products are in our local Enfield supermarkets. As we face falling off the Brexit cliff edge, our trade position will dramatically affect the price of everything from tea and coffee to fruit and veg. Liberal Democrats will always argue for policies which keep prices as low as possible for struggling local families trying to make ends meet, in addition to supporting the continuing development of nations which supply us with the many and various things which we have all grown accustomed to enjoying.” 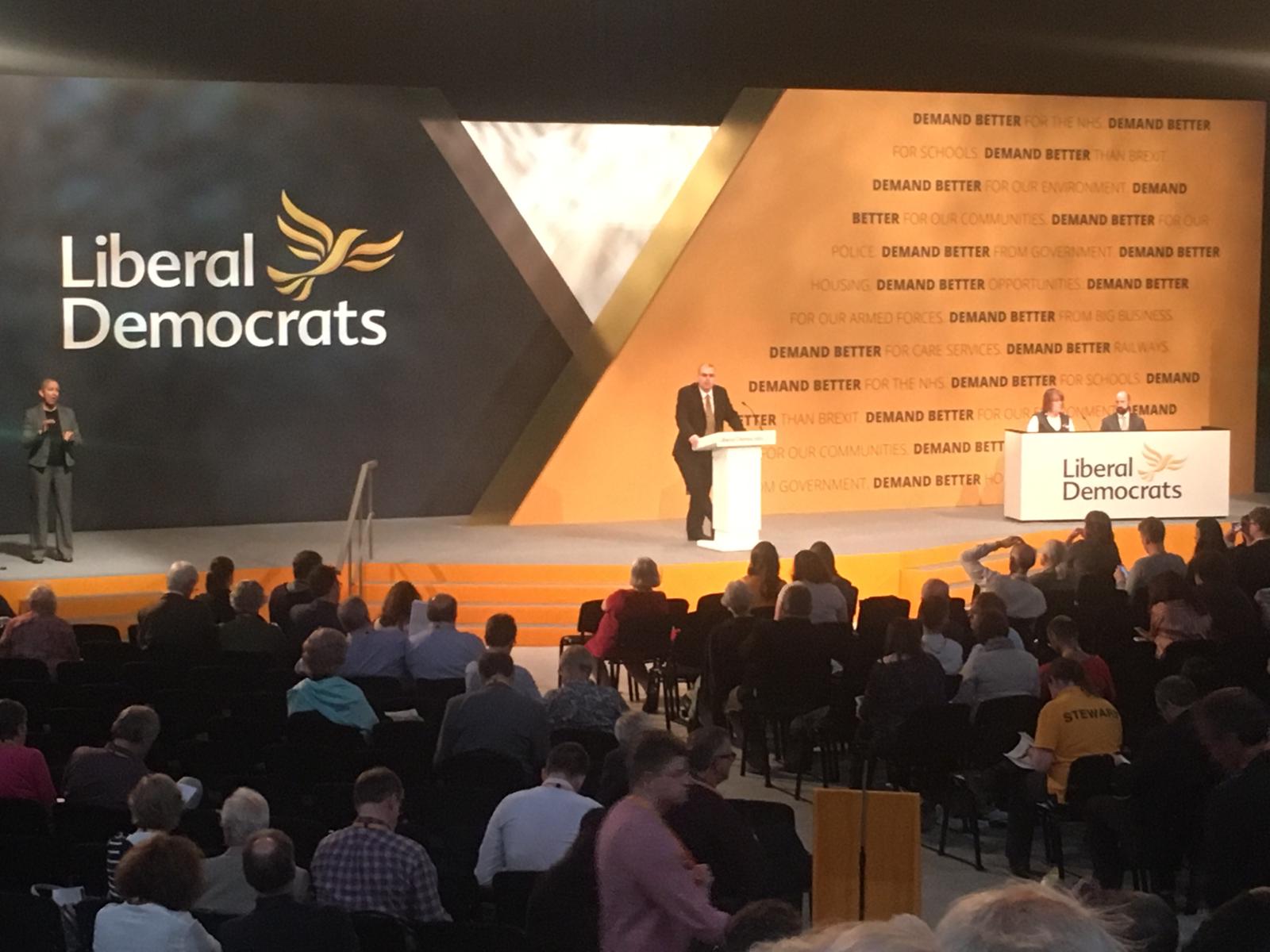 Fellow Liberal Democrats, firstly I want to make clear that the policy paper which this motion advocates is excellent. It sets out a clear, systematic and distinctly Liberal Democrat approach to the many and serious challenges facing both Britain and the world at what is undoubtedly a time of great threat to the liberal international order.

Nevertheless, there is a key principle mentioned in the policy paper which is conspicuously absent from the motion. A principle not only fundamental to our identity as a truly liberal party, but more importantly, absolutely essential to the proposed Liberal Democrat strategic global policy objectives. That principle is free trade.

It is important to remember this because, since the days of John Locke – the father of political liberalism – property ownership and the ability to trade your labour or property or for some other property or service, has been rightly considered to be a fundamental right. Ultimately, whether buying something or selling something, what you do with the resources legitimately at your disposal is and should be a matter for you – and not the Government.

Beyond the point of principle, however, there is a very practical argument to be made. Free trade is hugely transformative from the point of view of poverty reduction, and therefore can provide enormous benefits to developing nations.

These nations are home to people, just like those living here, trying to eek out a living for themselves and, ultimately, when cultivating a crop, producing a product, or offering a service – they want to be able to compete for customers without what their selling being made more expensive by protectionist Governments putting up arbitrary barriers.

This is exactly the misguided approach currently being pursued by Donald Trump. Not only do moves like his cut off honest sellers of quality products in developing nations from their customer base – severing their route to economic empowerment – but they make products in our home economy more expensive for consumers and businesses alike. Ultimately everyone is poorer.

Now, none of this to say that trade ought not to be regulated. There is much already in the motion and policy paper before us about the need for better regulation of international trade to ensure fair competition and the protection of both human rights and environmental integrity. We do not disagree with any of it. Nevertheless, trade free from arbitrary barriers imposed by short sighted Governments in the pursuit of narrow, ultimately self-defeating political objectives must be a cause we can all get behind.

Free trade empowers developing nations, lowers prices at home, prevents arbitrary interference by small-minded despots like Trump, and is ultimately the liberal approach. So, Conference, please let us be absolutely clear that it is indeed the Liberal Democrat approach. I beg to move Amendment 3. Thank you.